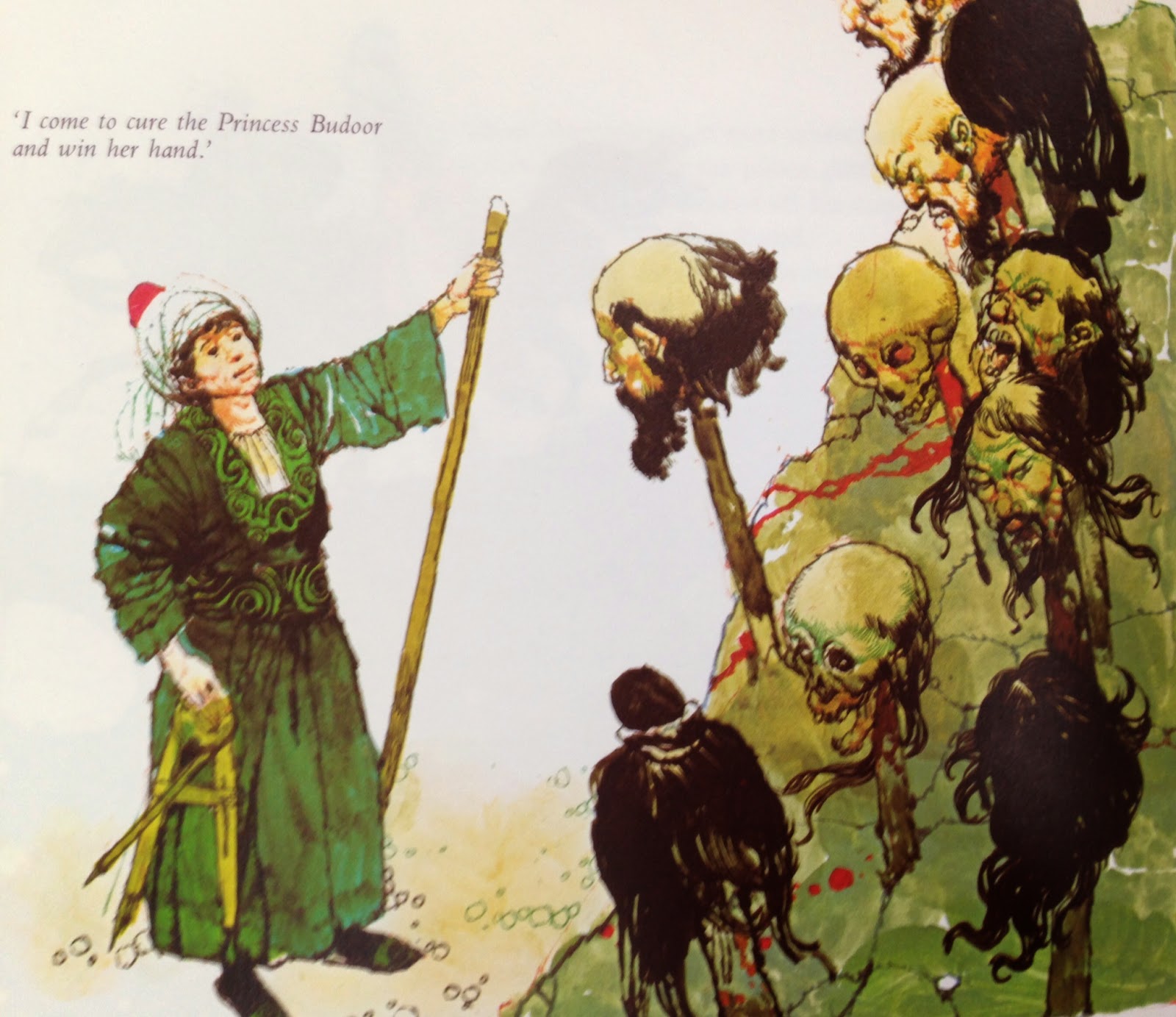 (Illustration by Victor Ambrus, from a children's version of Tales from the Arabian Nights by James Riordan)


“Of the series of Golden Boys, of which Harun Al-Rashid seems to be a recurring unit in several but probably not all of the chains, I will say that they are pseudo-Golden-Boys,” Spy Alexander was continuing his discourse. And yet he seemed a little bit shaken by the near encounter he’d had with his head. Ah well, spies are taught to keep their heads at all times. “Only one of them was the Golden Boy, the Boy-King; but he was imitated both before and after the fact by these lines of pleasant imposters. The swift and sudden pleasures encountered by all persons in the presence of the pseudo-Golden-Boys is bait; and we are the fish who take it. I believe that all of them stem from hell. But here I must impose something that strains my Christian faith. For we militant Christians of Astrobe believe in only one hell. But the Moslems of Gaea-Earth, and other persons on other worlds, subscribe to from seven to nine hells. I believe that the fakery of the Golden-Boy-lines stems from one of the usually easy-going hells of the Moslems. It is evil, of course, and it is set in the direction of ultimate evil. But it will hardly arrive at that ultimate in this aeon, and probably not in the next.

“The Golden Boys have no adult form, not the pseudo ones, not even the True One. Christ Himself of Gaea-Earth was not made man: he was made boy. And as a Boy, but perhaps under the appearance of a Man, he was executed, with a fantastically powerful recoil that shook Gaea in root and branch. The Lords of a more easy-going hell believe that they can ape this great redemptive recoil: and they shoot their bolts, their Golden-Boy arrows, one after the other. There it is, Essindibad and his good wife! If you have followed me this far, you have followed me five-eighths of the way to hell. Do you think you might follow me a little bit further?”


One of the few reviews of Sindbad: the Thirteenth Voyage available at present can be found here: http://ferretbrain.com/articles/article-264. It's a good review. (The same author has written of The Devil is Dead here: http://ferretbrain.com/articles/article-240.html). One big reservation that Arthur B, the reviewer, has is the novel's "unsympathetic treatment of Islam." But I just don't see it.

As Arthur notes, the buckets of blood and severed heads are there at the instigation of Harun, who has been clearly shown to be something-other-than-human (see p. 37 and other places). Sindbad denies that Harun could be a Ghul (known for drinking blood and mentioned in the Arabian Nights) but Harun himself suggests that the blood is for drinking (p. 38). That there is a wink here only shows that Lafferty, like his devil Harun, is playing with the tropes of the Arabian Nights. Lafferty is obviosuly delighting in the beheadings and the buckets of blood.

Any tension between Lafferty's novel and Islam is already present as a tension between the Arabian Nights and Islam. As I understand it, the 1001 Nights has never been all that popular officially in Islamic cultures. According to Robert Irwin, "Even today, with the exception of certain writers and academics, the Nights is regarded with disdain in the Arabic world. Its stories are regularly denounced as vulgar, improbable, childish and, above all, badly written." (http://en.wikipedia.org/wiki/One_Thousand_and_One_Nights#In_Arabic_culture)

"Vulgar, improbable, childish and, above all, badly written" sounds like just the sort of thing that Lafferty would cherish!

Interestingly, beyond riffing on the Nights, Lafferty is writing a Secret History (in the sense that Tim Powers' novels are Secret Histories; related, Powers has also been charged with culture insensitivity in his treatment of Islam in his excellent Drawing of the Dark). Besides the fantasy setting, many of the events and characters have a basis in reality. One clear indication that Lafferty is not knee-jerkedly "Islamophobic" (which shouldn't even be an issue considering his obvious affection for the "Moslem monk [who] immediately recognized that they [the 1001 Nights] were thumpingly good adventure espionage blood-and-thunder yarns) is his appreciation of 8th and 9th century Baghdad and its culture. Lafferty is very positive about the reigns of al-Amin and al-Mamun even if he fictionalizes a conflict between them for the purposes of his story.

Lafferty is very much willing to "hang out" with Muslim characters and enjoy their company. Lafferty's raucous joy at beheadings and blood-drinking may seem insensitive or offensive. I can't help, though, but to think that these descriptions are given out of enthusiastic appreciation and not any phobia or hatred. Then again, maybe I'm defending Lafferty because I share in his cultural insensitivity, blinded by my Western-Christian-Anglo background.

Arthur speculates that "Lafferty, a devout Catholic, would be made decidedly uncomfortable by a book in which the investiture of a new Pope involved mass bloodshed, or in which Catholicism is written off as a historical accident." But I doubt it. Lafferty was a fan of Rabelais. I'm sure that he was familiar with the Decameron. Lafferty was of thicker skin than Arthur gives him credit for. Lafferty was, after all, published in Dangerous Visions. He was familiar with the SF New Wave and all of the attacks on crumbled Christendom that those young wanna-be rebels could muster. I'm sure that he had read Moorcock's "Behold the Man" without pulling out all of his hair. Then again, he does appear to have lost all of his hair later in life!

There probably is something, at least, to the idea that Lafferty privileges the perspectives of characters like the Astrobean Christian spy Alexander that I started this post with. When I read the above, I felt like I had finally stumbled onto one key into the book and understanding what the conflict was that had attracted so many intergalactic spies to Baghdad. It is the battling of an attractive counterfeit vision. It's important to note that Lafferty does side with the view that this vision is counterfeit. It's also worth pausing to reflect that he acknowledges and respects it as attractive.

Further along, it is revealed that "All of these dubious spirits and devils were imprisoned in the interior of one one world, Gaea-Earth.." Sindbad's mission is to prevent the release of these Evil Spirits so that they may not carry their plague out to other planets. As this is revealed, the plot seems to sharpen and I was prepared for an epic conflict. And we do get a very intense (and amusing) battle between dragons belching demons and Sindbad and the others.

Okay, I didn't try too hard to keep from spoiling that from anyone reading this. Because, you know what? Even though I was disappointed as everything comes to a fizzle, a re-reading of the first chapter reveals that Lafferty repeatedly mentions exactly what the mission was and that it was technically a failure. I felt smart for teasing it out and then felt bested when my expectations were thwarted. But, if I had been paying attention, Lafferty had already clearly set out what he was doing in the very first chapter.

There's more to write, but I'm afraid that I've waited too long since reading Sindbad. Maybe I'll read it again sooner rather than later. As it has settled, it has become my favorite Lafferty novel. Partly, this is due to the playfulness of Lafferty's writing and story structure. Mostly, though, it's because Sindbad is a thumpingly good adventure espionage blood-and-thunder yarn.
Posted by trawlerman at 5:49 PM

RAL: I read books to hear what people are up to. This is the only approved and organized form of eavesdropping. I listen for whatever interests me. If I don't find it, I put the book away and go to another book. Eavesdropping is about as close as we can get to the quintessence of people. They fumble it when you encounter them directly, but they reveal a lot when you hear them in this or any other way. People, that is what I read for; to get the marrow out of their bones and to enjoy it.

'Go then, there are other blogs.'

Seek and ye shall find;